I just finished re-reading Mancur Olson’s “The rise and decline of nations”, published in 1982. (According to my notes I had read parts of it back in grad school, for my general exams, but I have absolutely no memory of that.) Olson offers an elegant, concise explanation for why economic growth varies over time. TL;DR: parasitic coalitions - unions, subsidized industries, licensed professions, etc - multiply, causing distributive conflicts and allocative inefficiency, and those coalitions can’t be destroyed unless there is radical institutional change, like foreign occupation or totalitarianism. In a different life I would ponder the political implications of the theory. But I’ve been in a mercenary mood lately, so instead I’ve been wondering what the financial implications are for us folks trying to grow a retirement fund.

Small groups organize more easily than large groups. That’s why tariffs exist: car makers are few and each has a lot to gain from restricting competition in the car industry, whereas consumers are many and each has comparatively less to gain from promoting competition in the car industry. This argument is more fully developed in Olson’s previous book “The logic of collective action”. What Olson does in “The rise and decline of nations” is to use that logic to understand why rich countries decline.

Once enacted, laws that benefit particular groups at the expense of the rest of society - like tariff laws - are hard to eliminate. The group that benefits from the special treatment will fight for its continuation. Organizations will be created for that purpose. Ideologies will be fomented to justify the special treatment (dependency theory, for instance, is a handy justification for tariffs and other types of economic malfeasance).

Meanwhile, the rest of society will be mostly oblivious to the existence of that special treatment - as Olson reminds us, “information about collective goods is itself a collective good and accordingly there is normally litle of it” (a tariff is a collective good to the protected industry). We all have better things to do with our lives; and even if we could keep up with all the rent-seeking that goes on we’d be able to do little about it, so the rational thing to do is to stay ignorant (more on this).

Hence interest groups and special treatments multiply; competition is restricted, people invest in the wrong industries, money is redistributed from the many to the few. The returns to lobbying relative to the returns of producing stuff increase (more on this). Economic growth slows down. Doing business gets costlier. As Olson puts it, “the accumulation of distributional coalitions increases the complexity of regulation”. Entropy. Sclerosis.

Until… your country gets invaded by a foreign power. Or a totalitarian regime takes over and ends freedom of association. One way or another the distributional coalitions must be obliterated - that’s what reverses economic decline. That’s the most important take-away from the book. Not that Olson is advocating foreign invasion or totalitarianism. (Though he does quote Thomas Jefferson: “the tree of liberty must be refreshed from time to time with the blood of patriots and tyrants”.) Olson is merely arguing that that’s how things work.

I won’t get into the empirical evidence here. The book is from 1982 so, unsurprisingly, Olson wasn’t too worried about identification strategy, DAGs, RCTs. If the book came out today the reception would probably be way less enthusiastic. There are some regressions here and there but the book is mostly narrative-driven. But since 1982 many people have tested Olson’s argument and a 2016 paper found that things look good:

Overall, the bulk of the evidence from over 50 separate studies favors Olson’s theory of institutional sclerosis. The overall degree of support appears to be independent of the methodological approach between econometric regression analysis on growth rates versus narrative case studies, publication in an economics or a political science journal, location of authorship from an American or European institution, or the year of publication.

can Olson help us make money?

There isn’t a whole lot of actionable knowledge in the book. We don’t have many wars anymore:

I mean, between 2004 and 2019 Iraq’s GDP grew at over twice the rate of Egypt’s or Saudi Arabia’s. And between 2002 and 2019 Afghanistan’s GDP grew at a rate 36% faster than Pakistan’s. But that’s about it. A Foreign-Occupied Countries ETF would have a dangerously small number of holdings.

And there aren’t many totalitarian regimes in place: 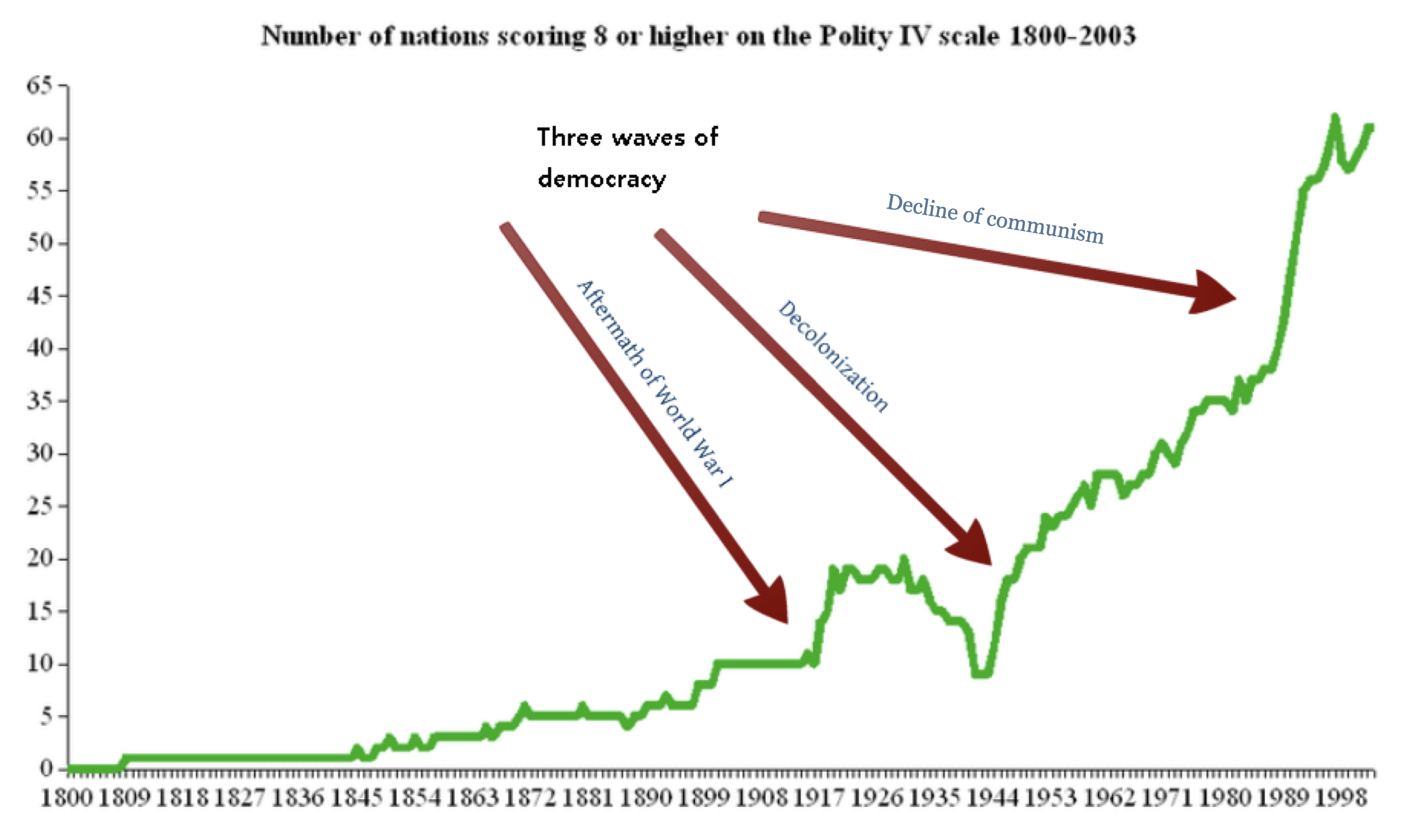 A Dear Leader ETF would also be super concentrated. (Not to mention that it would contain North Korea and Turkmenistan.)

In any case, GDP growth and stock market growth are different things. Over the last five years the S&P500 outgrew the US GDP by 83%. Conversely, the annualized return of the MSCI Spain was lower than 1% between 1958 and 2007 even though the annualized GDP growth was over 3.5% in that same period.

So, country-wise there isn’t a lot we can do here.

Olson’s book is about countries - it’s in the very title. But his argument extends to industries. Olson himself says so when he talks about the work of economist Peter Murrell:

Murrell also worked out an ingenious set of tests of the hypothesis that the special-interest groups in Britain reduced the country’s rate of growth in comparison with West Germany’s. If the special-interest groups were in fact causally connected with Britain’s slower growth, Murrell reasoned, this should put old British industries at a particular disadvantage in comparison with their West German counterparts, whereas in new industries where there may not yet have been time enough for special-interest organizations to emerge in either country, British and West German performance should be more nearly comparable.

In other words, new industries will have fewer barriers to entry and other organizational rigidities. This seemingly banal observation, which Olson saw as nothing more than a means to test his theory, may actually explain why we don’t have flying cars.

Back in 1796 Edward Jenner, noting that milkmaids were often immune to smallpox, and that they often had cowpox, took aside his gardener’s eight-year-old son and inoculated the boy with cowpox. Jenner later inoculated the boy with smallpox, to see what would happen, and it turned out that the boy didn’t get sick - the modern vaccine was invented. Now imagine if something like the FDA existed back then. We probably wouldn’t have vaccines today, or ever.

It’s the same with the internet, social media, Uber, just about any new industry or technology: at first the pioneers can do whatever they want. But then parasitic coalitions form. They can form both outside the new sector and inside it. Taxi drivers will lobby against Uber. Uber will lobby for the creation of entry barriers, to avoid new competitors - incumbents love (the right type of) regulation. Both sources of pressure will reduce efficiency and slow growth.

Investment-wise, what does that mean? That means it will become a lot harder for, say, ARK funds to keep their current growth rate. ARK funds invest in disruptive technologies - everything from genomics to fintech to space exploration. They are all new industries, with few parasitic coalitions, so right now they’re booming. (Well, they may also be booming because we’re in a big bull market.) But - if Olson is right - as those industries mature they will become more regulated and grow slower. ARK will need to continually look for new industries, shedding its holdings on older industries as it moves forward.

In short: Olson doesn’t help us pick particular countries to invest in, and he doesn’t help us pick particular industries to invest in, but he helps us manage our expectations about future returns. Democratic stability means that fewer of us die in wars and revolutions, but it also means that buying index funds/ETFs may not work so well in the future. Democratic stability - and the parasitic coalitions it fosters - means that today’s 20-year-old kids may be forced to pick stocks if they want to grow a retirement fund. (Though if you’re not Jim Simons what are your chances of beating the market? Even Simons is right only 50.75% of the time. Are we all going to become quant traders? Will there be any anomalies left to exploit when that happens?)

but what if the country has the right policies?

Olson gives one policy prescription: liberalize trade and join an economic bloc. Free trade disrupts local coalitions, and joining an economic bloc increases the cost of lobbying (it’s easier for a Spanish lobby to influence the national government in Madrid than the EU government in Brussels). But policy is endogenous: the decision to liberate trade or join an economic bloc will be fought by the very parasitic coalitions we would like to disrupt. And if somehow the correct policy is chosen, it is always reversible - as the example of Brexit makes clear. Also, not all economic blocs are market-friendly. Mercosur, for instance, has failed to liberalize trade; instead, it subjects Argentine consumers to tariffs demanded by Brazilian producers and vice-versa. (I have no source to quote here except that I wasted several years of my life in Mercosur meetings, as a representative of Brazil’s Ministry of Finance.)

So it won’t do to look at the Heritage Foundation’s index of economic freedom and find, say, the countries whose index show the most “momentum”. One day Argentina is stabilizing its currency, Brazil is privatizing Telebrás. Latin America certainly looked promising in the 1990s. Then there is a policy reversal and we’re back to import-substitution. You can’t trust momentum. You can’t trust economic reform. You can’t trust any change that doesn’t involve the complete elimination of parasitic coalitions. And even then things may decline sooner than you’d expect - Chile is now rolling back some of its most important advances.

what if ideas matter?

In the last chapter of the book Olson allows himself to daydream:

Suppose […] that the message of this book was then passed on to the public through the educational system and the mass media, and that most people came to believe that the argument in this book was true. There would then be irresistible political support for policies to solve the problem that this book explains. A society with the consensus that has just been described might choose the most obvious and far-reaching remedy: it might simply repeal all special-interest legislation or regulation and at the same time apply rigorous anti-trust laws to every type of cartel or collusion that used its power to obtain prices or wages above competitive level.

That sounds lovely, but it’s hard to see it happening in our lifetimes. Even if ideas do matter the Overton window is just too narrow for that sort of ideas. It’s probably The Great Stagnation from now on.